The End of an Era

Today marks the end of an era.

The last pet from the old homestead has passed. 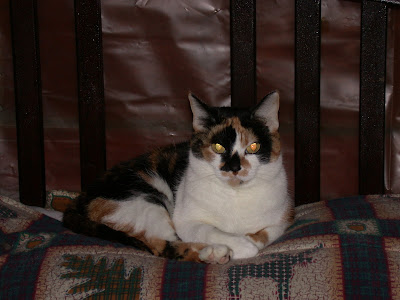 Callie was a 20, almost 21, year old calico that was adopted from the kennel by our old house back in 1992.

She was originally brought home to be my cat, then my sister claimed her, then she became our dad's cat (who always said he didn't want any cats), and then she became both of our parents cat.

The past couple years she battled CRF. My Mom wrote a few posts about it, but basically it's a kidney disease for felines. Most are expected to live only about 6 months after diagnoses. Cal lived almost 3 years past I believe.

Callie was always a fighter. Well, Mom and Chris and I always called her a Bitch, or the Queen Bitch as she always wanted to go fight. Just ask my sister, she'll show you the scar on her forearm.

Cal was never really good with little kids. Even I, being 7 when we got her, never got very close very often. She hissed at me or growled. I backed away swiftly every time.

Even our children knew to back away when they heard that.

Strangely, Corey befriended her right away. She always let him pet her when he wanted to. Never hissed at him.

The first time she met Tipper, my old dog who passed away about 8 years ago I believe, Cal peed on the floor. Then they became best buds. Always sleeping on Tipper's big pillow. 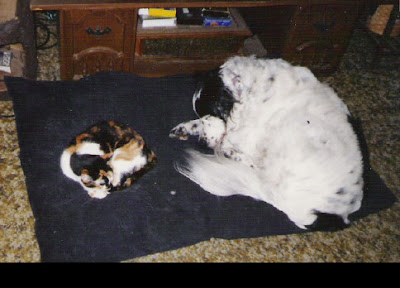 Callie always wanted to tease Natasha, Christine's cat, the Queen Kitty. Tash didn't let it bother her too much, unless Callie persisted, at which point Tasha would swipe and Cal would back down.

Once we knew Tasha was dying (she had cancer in her mouth), we saw Callie and Natasha together more often. It was almost like Natasha was training Callie to take over. And that's what happened.

When we found out about Callie's CRF, we suddenly realized how much she was around Thor, Mom's other cat. Again, it was like Callie was training Thor, passing on the title of the house.

I know my Mama's hurting a lot right now, so if you could all pop over and give her some encouraging words, that would be much appreciated. I'm sure some of you know how much it hurts to see a pet (who's almost like a family member) pass away, and today is no exception. Mom's been waiting for a sign from Callie, and it came. 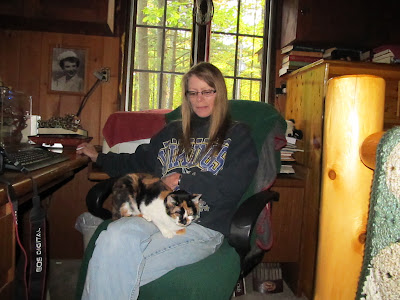 RIP Callie. You will be sorely missed by your family. But now you're pain free, and you get to see your buddy Tipper and pick on Natasha. We love you.
See? Always a fighter. Down to the end.
Posted by Nichole at 7:02 PM