For those of you who don’t know, my dad has been having a really rough last several months. Back in June, he shaved his beard and found a lump on the left side of his neck. He had to wait over a month for a final diagnosis, and when he got it, it was pretty daunting: Stage 4 Squamous Cell Carcinoma. Cancer. Wow. The outlook was pretty good, about a 70% chance of curing him, but the time leading up to that would be grueling.

Since the diagnosis, Dad has had to have multiple tests and scans done. He had the left tonsil removed, which is where they are pretty much positive the cancer was generating from. Then he had to have all but 2 of his teeth taken out due to Periodontal Disease. If he didn’t have them taken out, he could develop Osteo-Radio-Necrosis down the road from the radiation. Next he had his chemo-line put in and a feeding tube also put in.

Two weeks ago my Dad made a very hard decision, but it was the best for him. He decided to go to the feeding tube for his nutrition as his throat is fried from the Radiation. He’s very glad they put the feeding tube in at the beginning of this. He will be on a liquid diet for another couple of weeks until his throat feels better and he can actually swallow without feeling like his mouth is full of broken glass.

Throughout all of this, my mother has been taking care of him, with the help of a few of their closest friends. My grandmother helped as well the weekend I went up to help my mom at the Cranberry Festival with her jewelry booth.

My Dad has also been working at his computer shop as much as he could until last week when the doctors wanted him to stay home due to a low-grade fever and he has also lost his voice, so it’s been hard for him to communicate without paper.

Tomorrow is the last day of his Chemo and Radiation treatments, and I say Hallelujah! My father is the bravest man I know and I love him very much. I hope he knows how many people are with him and have been with him throughout the whole process. I’ve watched my mother post every week an update of how things have been going, and I’ve seen the pictures that go along with them. I have been unable to see my dad in person since the Cranberry Festival weekend due to many reasons, and my children have been unable to see him since August, and I know they are very anxious for this all to be over. Yes, they know what is going on, to a certain extent, and they are holding out the hope that all will be well after tomorrow. 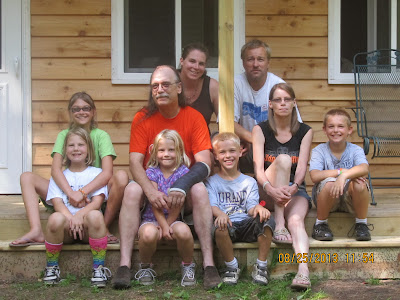 To two of the most important people in my life, my mother and father, I say I love you very much. Mom, you’ve been there helping Dad all through this, and I know it can’t be easy for you. You know we are all here for you and if you or Dad have needed anything you know we’re only 2 hours away. Dad, you’ve been so tough through all of this, and have stuck with it. I know it hasn’t been easy, but know that you will live. We are here for you and you are never very far from our minds
.
I ask everyone that reads this to think good thoughts for tomorrow for both my mom and dad. I also ask that you visit my mom’s blog and send let them know you are there for them. Thank You.
Posted by Nichole at 8:35 AM 2 comments: